A study published in the British journal Psychological Science based on 5,000 households with 10,000 adults over 17 years showed that living in a green space or park increases satisfaction. with life, making people feel happier. In addition, another study published in the journal Health and Place also found that families living near the sea experience less stress and mental health problems.

In Vietnam, urban areas that fully contain greenery, water surface, locations and 5-star amenities are often overvalued. In particular, Sun Grand City Feria is the only urban area currently in the center of Bai Chay, built by the investor Sun Group to become an urban area "human beings", which means people are the center of the development process. development. There, residents not only enjoy good conditions in terms of technical and social infrastructure but also take care of their spiritual life and positive emotions when connecting the community.

The highlight is the rich community living space system with 6 large parks with vibrant Spanish-inspired colors.

Here, young people are immersed in a series of exciting cultural and artistic events, parents have the opportunity to connect with their common neighbors, and children can eagerly explore the natural world. animals around.

The Calvia subdivision is inspired by an attractive and attractive tropical party for 365 days. The system of three parks Victoria, Valencia 1 and Valencia 2 in this subdivision is designed from the most famous Spanish festivals in the world, attracting tens of thousands of visitors to the land of gaur each year.

In it, Victoria Park carries the sound of the Haro wine festival in Spain with the wine fountains located in the center of the vibrant Haro square. The image of the fountain simulating the "holy grail" is also considered as a symbol of glory and joy spread after victory. The investor expects, every moment at Victoria Park, residents will be "burned" to their fullest during the festival, as if they were living in the fiery July days of Haro festival in northern Spain.

In addition to the vast Haro square, the Calvia subdivision also has lively sports fields. Valencia 1 and Valencia 2 parks are arranged scientifically between the rows of villas, ensuring easy access from any villa. 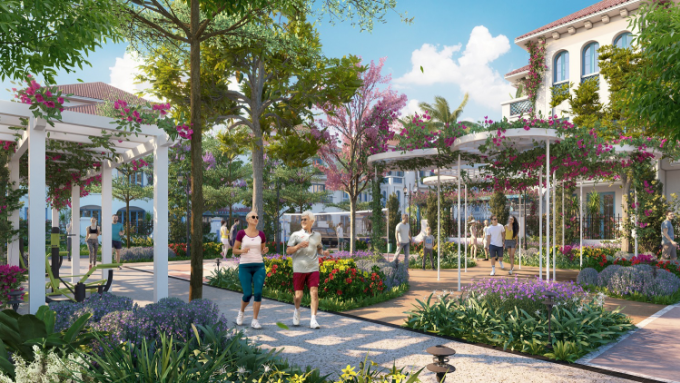 The sports playground at Valencia Park is designed with vivid colors such as red, orange, eye-catching combined with round shapes, soft spheres, kid-friendly.

Residents who have experienced Spain's biggest festival - Las Fallas will easily see many similarities between the design of Valencia park and the joyful and cheerful spirit of this festival. The childhood of the residents of Sun Grand City Feria will be lively and vibrant with children's parades, sports competitions, performances ... in Valencia sports park.

Gardenia - the inspiration from the Spanish garden

If the Calvia subdivision owns three parks with the square as a common place, Mallorca also owns three vibrant parks with typical tropical plants. Architects have turned the system of three Gardenia 1, 2, 3 parks into Spanish gardens as generous as the character of the Mediterranean. 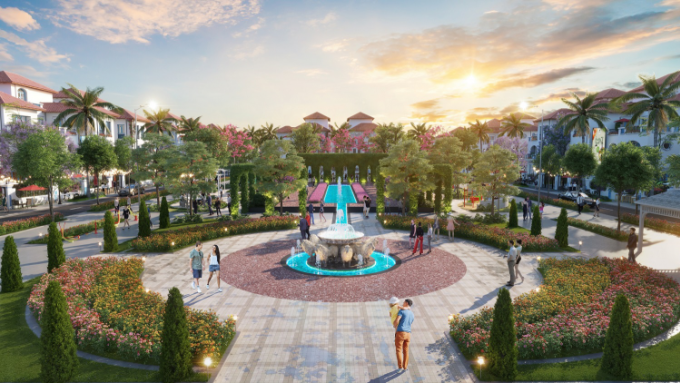 If the Alcazar garden at Gardenia 1 Park is a typical Mediterranean painting with vibrant small gardens, long water spouts, and colorful flowers, Gardenia 2's Torero Garden owns The design is round like bullfighting field with powerful Toro (gaur) and Matador (bull gladiator) statues. Finally, the Flamenco garden in Gardenia 3 park contains the story of the charming Flamenco dance of the land of bulls. From the design of the fence wall, the veranda, to the wooden beams are reminiscent of the beautiful little garden corners of Spain.

With Sun Grand City Feria, the investor Sun Group not only promises to create a model and comfortable urban area, but also builds this place into a cultural destination, connecting the community.

The last villas of the Sun Grand City Feria project are being sought, especially when the investor supports 0% interest rate for 30 months for a loan of up to 70% of the villa sale price, and at the same time donates a package. management service for three years. In addition, there is a summer gift package for a customer successfully transacting 300 million dong for a single villa, a gift of 150 million dong for a customer to buy a duplexed house, accompanied by some conditions.